Fresh from its success on the Dakar Rally, Team Peugeot Total is now aiming for the top in a brand-new adventure: the FIA World Rallycross Championship. To celebrate its first year in this spectacular and competitive sport as a full factory entry, the Peugeot Sport team is preparing a 2018 version of the Peugeot 208 WRX, which has already shown plenty of potential in rallycross since making its competitive debut in 2014. 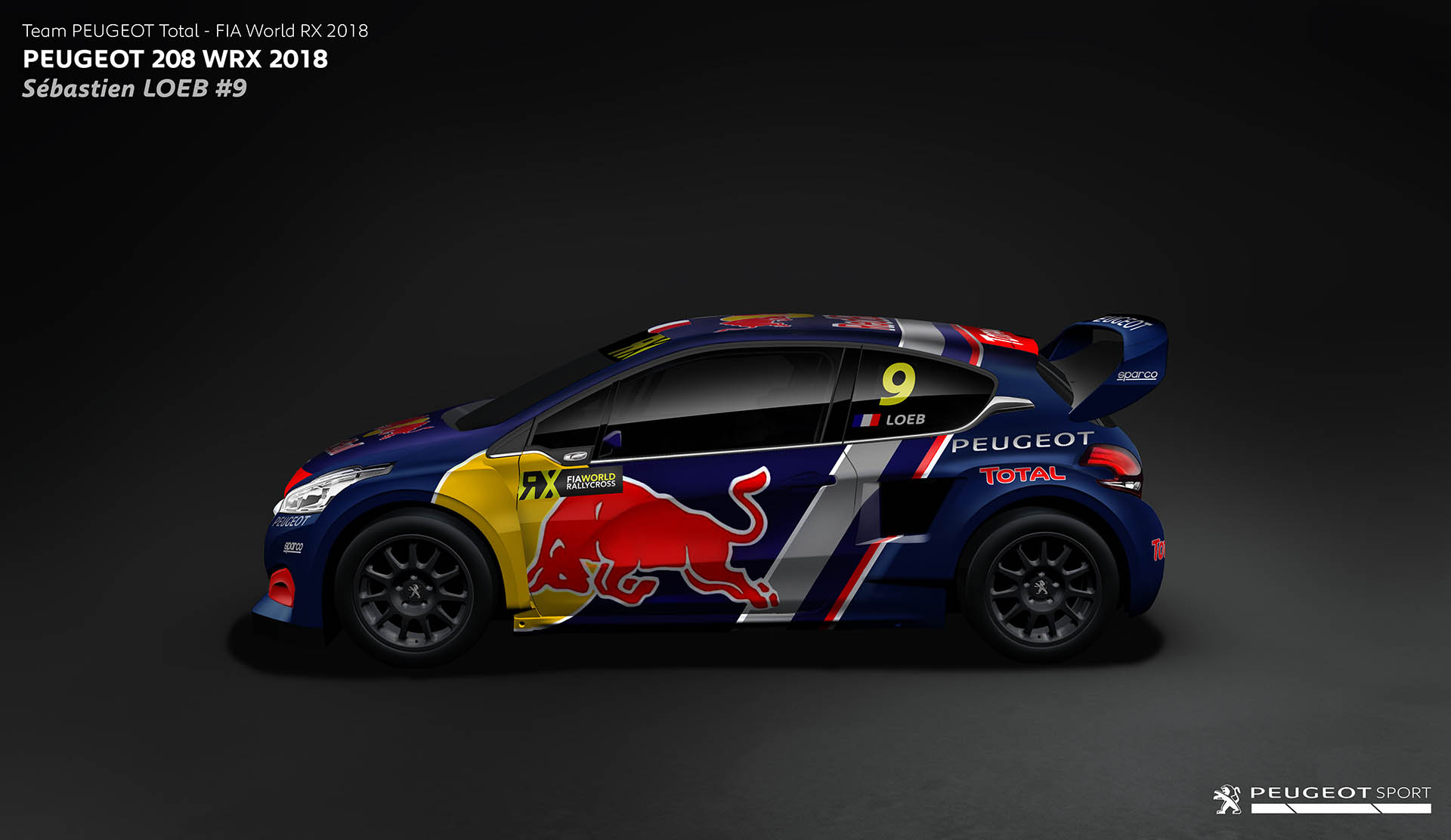 There will be 3 Team Peugeot Total official drivers on the 12-round World RX this year: the legend 9-time World Rally Champion Sebastien Loeb, rallycross frontrunner Timmy Hansen, and his fearless younger brother Kevin Hansen. The Swedes both represent the ‘next generation’ – part of the most successful family dynasty in the history of the sport -and will benefit from Loeb’s driving experience.

A new Peugeot 208 WRX has been prepared for 2018, that will be updated throughout the season, with step by step upgrades. The aim is simple: to score as many points as possible from the beginning of the season in a bid to claim the drivers’ and teams’ championships in future, adding to Peugeot’s illustrious off-road motorsport history.

While Loeb and Timmy Hansen will get to drive the new-specification 2018 car, Kevin Hansen will stick with an evolution of the 2017 car. The developments that will be brought to the latest-generation 560-horsepower Peugeot 208 WRX are designed to make it more powerful and driveable. Not only is it faster and lighter but it’s also easier to drive, with a more reactive feel and better torque.

The Peugeot Sport engineering team has worked intensively on aerodynamics to increase performance, with the car featuring a new wing and a new rear bumper from the start of the year. Mechanically, apart from engine evolutions, the new car also has revised front suspension, dampers and bigger wheels, as well as a faster gearshift and new roll cage. The result is a visually striking rallycross challenger designed to go as well as its eye-catching look, but with a strong resemblance to the best-selling PEUGEOT 208 road car on which it is based.

“This marks the start of an exciting year for us, as the FIA World Rallycross Championship will be Peugeot’s key motorsport engagement in a factory capacity, with new rivals and a new environment. However, even though we have some past knowledge of the sport through the Peugeot-Hansen team, we have to be realistic, as our competitors are very experienced while we will have to train our team for this new discipline from scratch! Despite this big challenge, we are aiming for some wins this season, then something more in the seasons beyond. We decided to participate in world rallycross because we firmly believe in the future of this sport: the sporting format, which is short and intense, is exciting, the audience, younger than in other categories, is still growing, and furthermore we also believe in the electric future of the championship. So, we are preparing for this new generation of powertrain and new generation of fans right now, with the clear aim of promoting our current Peugeot 208 and its successor.”

“The target with our new car is to reach the level where we can compete with the frontrunners in rallycross and fight for the championship. And so, we have been through every aspect of the current car to identify ways in which we can reach that target. The result is a new car that will be progressively updated throughout the year. We start with quite a well-proven package, but as you add new elements to give you more performance, this can also come at the expense of reliability. Consequently, there is always a certain risk and we know we have a big challenge ahead. Our drivers are more than capable of fighting for wins, so I believe there’s a lot of potential in our package.”

“My expectations are high for this year. Peugeot coming in as a factory team was exactly what was needed to take things up a level and enable us to fight for the championship. In the past we were close, but we were just missing a little extra. Now Peugeot’s official engagement can bring us that. We won’t have all the evolutions at the start of the year and that will make it difficult to fight for the championship from the beginning, but you never know: it all depends on how quickly we can develop. From a driving point of view, rallycross provides probably the most intense experience you can have as a driver. The races are very short, but the sensation is really amazing: the cars are like big WRC cars to drive, with 600 horsepower, so it’s a lot of fun. I’m looking forward to the season.”

“I’ve never competed at such a high level before with a factory team, so it’s an honour to be chosen to represent Peugeot at such an important time. We’re expecting the car to be better than ever with all the evolutions implemented by the Peugeot Sport engineers, so this certainly increases our opportunity to do well, but we’ve got to remember that there are some very strong rivals in this championship. I prefer to keep my feet on the ground. My aim is simply to do as well as I can on every round, so that we can build on our progress step by step. I’m looking forward to getting behind the wheel at the first round in Barcelona; then we will see where we are compared to the others.”

“This is a fantastic opportunity for me, to join the official Peugeot team and to benefit from all the team’s knowledge. Maybe it’s come as a surprise to some people because my season last year wasn’t great, but I’ve learned a lot and I’m sure I can come back stronger. My aim is to be in the finals more often this year: if I achieve that, then we can maximise our chances. It’s so fantastic to have Peugeot in the sport as a factory team, and a sign of the big manufacturer interest in the future of this series, especially with the move to eventually becoming an electric championship. This is all positive.”